David Irving, a Labour voter and the mystery of Holocaust revisionism.

[NB: The materials herein are freely available in the public domain, and this is produced as an educational resource for antiracists and antifascists.]

Since the 1950s supporters of National Socialism (Nazism) have tried numerous methods of repudiating its crimes.

Initially their tactic was straight out denial, but that never really worked. Decent people remembered how the Nazis started World War II, conquered Europe, slaughtered civilians, imprisoned and murdered Jews and brought destruction to wherever they went.

Next, the apologists change tact.

Typically, such views were confined to the fringes of the Extreme Right, to neo-Nazis thugs and their allies.

But now on social media it is perfectly possible to find a Labour supporter or member who subscribes to such views and makes a conscious effort to deny antisemitism within the Labour Party.

Naturally, the two go hand-in-hand, those who wish to diminish the crimes of the Nazis and deny the Holocaust will habitually argue that antisemitism is overblown.

So it is with this occasional Labour supporter, Mr Monday Night!‏ AKA @Ibsy1786.

[The details of his wider prejudices and racism towards Jews are kept on the Wordpress blog.https://antinazisunited.wordpress.com/2017/08/27/mr-monday-night%e2%80%8f-aka-ibsy1786/ This is just a small summary of his vile opinions.] 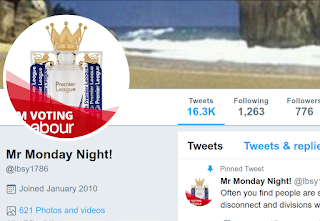