The Democratic Socialists of America, the Nation and colonialistic thinking 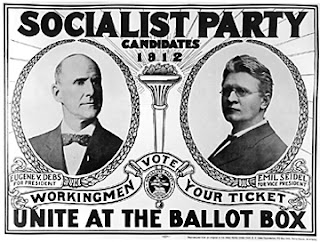 I've always had a bit of a soft spot for Eugene Debs, so I looked forward to hearing what had happened at the recent Democratic Socialists of America convention.

I avidly read an article in the Nation, yet parts were missing.

Nothing about the conference's key events, but thankfully the Twitter feed of the DSA was enlightening.

But again, the key parts were missed out

1. Yes, there was a vote on boycotting Israelis. Not that anyone at DSA thought through the racist implications of it or where it would lead, ie. attacks on Jews.

2. The enthusiastic chanting of "From the river to the sea/ Palestine will be free" really said what DSAers were about.

It means the supporting of a pogrom of Jews in the Middle East (how else would such an aim be achieved?).

3. Apparently, attendees of the DSA were transfixed with the misdemeanours of Israelis that they, mistakenly, forgot about Syria.

They forgot it was instigated by Assad's regime and actively supported by Russia.

FROM THE RIVER TO THE SEA PALESTINE WILL BE FREE @DemSocialists pic.twitter.com/F7IBFPHTLr
— the bds kid 🌹 (@kid_mao) August 5, 2017

There was a time when socialists were internationalists, universalists and had read enough history to know what "pogrom" meant, alas at time has passed.

However, it takes a certain type of colonialistic thinking to ignore what is happening in Syria and not know the real meaning of "From the river to the sea/ Palestine will be free".

Still, I am sure Richard Spencer is very proud of the DSA, he's none too keen on Jews either, he boycotts whenever he can.

There are various reports in the press about the DSA, some talk of their commendable work highlighting inequality in health care and their recent growth.

None touch on the topic of racism.

Can the Growing Democratic Socialists of America Build a New, Coherent Left Wing?

The Democratic Socialists of America Are Dreaming Big but Acting Locally

Inside the biggest gathering of American socialists in decades