In politics there are many potential obstacles and if you happen to disagree with a leader with sizeable support that can annoy his/her supporters.
But under no circumstances should racism be used to score points in political disagreements.
Clive Lewis is the butt of racism from a Labour-supporting account on Facebook, having resigned from Labour’s Shadow Cabinet .
“Red Labour” has some 36,000 followers, yet bar one, none of them spotted the racist overtones of this particular post [my emphasis]:

“Clive Lewis. Wasn’t he the one who recently appeared in the Al Jazeera documentary on the infiltration of the Israel lobby in British politics. Wasn’t he the one that the Israeli ambassador victoriously claimed as a new surprising asset in their active struggle to undermine Jeremy Corbyn?

We may also remember that this Israeli agent boasted that their aim was to “bring down” UK politicians to get a grip on them.

The not too subtle implication is that Clive Lewis is a puppet of Israelis.
Irrespective of the stupidity of this comment anyone moderately conversant with history knows that a longstanding antisemitic motif was how Jews are caricatured as “puppet masters” or said to be behind the scenes manipulating events.
It seems that this particular Red Labour account shares those prejudices.
It is utterly disgusting.
But recently parts of the British Left have taken up the ideas of the Extreme Right in this critical area. It is conspiratorial antisemitism. Randall Bytwerk and Calvin College’s archives have similar examples of antisemitic thinking from the WW2 era: 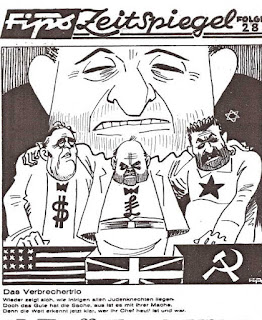 “Published after the invasion of the Soviet Union, this cartoon from Der Stürmer is tilted “The Criminal Trio.” A Jew is behind the three Allied leaders. The text states that they make it clear who their chief is today, and always was,