Antisemitism: the Stink Factor is intended to be a regular summary of antisemitic rantings or happenings over the past week or so. It will also cover antifascist material when deemed relevant.

It is far too easy six months after some bout of racism to forget what happened or who were the key players. We intend that our weekly posts should remedy that.

Its aim is to be informative, occasionally humorous even acerbic but relevant to tackling the rise of antisemitism and its themes in modern society.

Like David Ward, another failure from the Lib Dems, Baroness Tonge is never ever far away from antisemitism. 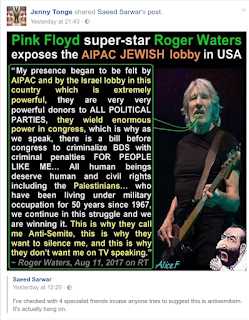 This week she passed on a nasty antisemitic cartoon from a friend of hers, who claimed it had been checked beforehand for racism, presumably by the BNP or David Duke?

Donald Trump managed to divest himself of two nasty characters in the last few weeks. Steve Bannon, a corpulent and decidedly unhealthy looking member of the master race, has return to Breitbart, the Alt-Right's favourite publication.

Sebastian Gorka, a supporter of Hungarian neofascists, has more time to spend fiddling with his Vitézi Rend badge.

There has been continued bouts of hand-wringing on the political Right and amongst wooly liberals on whether or not to physically opposed neo-Nazis. They actually debate who is worse? Neo-Nazis that deliberately crash a car into peaceful opponents, killing Heather Heyer. Or people who wear masks and oppose neo-Nazis.

Not exactly a tricky proposition.

But let us recall some lovely American antifascists of a bygone age.

You might think that members of Jeremy Corbyn's shadow cabinet, if they had an ounce of sense, would avoid the topic of antisemitism lest it comes back and bites them.

But alas they seem to have the political commonsense of Donald Trump's socks.

Shadow Minister for Fire and Emergency Services, Chris Williamson, himself no stranger to antisemites felt it was appropriate to argue that antisemitism had been weaponised.

There were many replies on social media, just a small selection:

21/ So then @derbychrisw - why don't you 'weaponise' that and do something about it instead of nurturing and provoking this toxic filth?
— Marlon Solomon (@supergutman) September 1, 2017

Miriam Mirwitch spelt it out:

It'd be a really big help to our movement if you stopped saying antisemitism is weaponised or overplayed, and instead listened to Jews.
— Miriam (@mrwtch) September 2, 2017

Antisemitism has always been weaponised by antisemites & those who use it to whip up the mob. Not by the Jews who are worried about it. https://t.co/NQGW8WA43F
— Dave Rich (@daverich1) September 1, 2017

In good news, Daily Stormer has struggled to keep its Internet presence alive in the wake of Charlottesville, first going to Russia and now is stuck on the Dark Web.

Even Stormfront, a deepest pit of KKK and neo-Nazi thought on the web, has gone off-line.

Waiting for a Perfect Protest?

CST's HATE CRIME: A guide to those affected

In chat rooms, Unite the Right organizers planned to obscure their racism

The history, theory and contradictions of antifa

Odd antisemite in the news

The Jewish Labour Movement conference is on Sunday, 3rd September 2017, with sessions covering politics and lots of intelligent conversation. Tickets and details here.


That Nazi who cried doesn't want to be labeled the 'crying Nazi'
Posted by Anti-nazis united at 09:58