Few doubt that Salvador Dali was an artistic genius, creative and profound in some ways but as Orwell said:


"One ought to be able to hold in one's head simultaneously the two facts that Dali is a good draughtsman and a disgusting human being. "

So it's perfectly possible to be a genius at the arts and be a rather nasty thinker in other areas.

The anitsemites Richard Wagner, Ezra Pound and TS Elliott come to mind in that regard, not forgetting the American artist Kalen Ockerman (AKA Mearone) either.

Ockerman's work gained approval from odd quarters, even Jeremy Corbyn defended his antisemitic mural in East London, until it was removed. It is not a new issue and was highlighted in 2015. 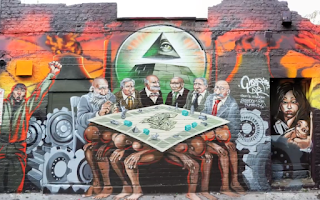 However, it is unlikely that Jeremy Corbyn realised how Kalen Ockerman was a fan of David Icke.

That he was a Chemtrails crank too.

#Chemtrails have been at an all time high in the #LA sky. Wake up #EarthPeople do the research #HAARP pic.twitter.com/lipcPA7lFS
— MEAR ONE (@mearone) March 2, 2016

That Ockerman had "questions" about 9/11?

How he rants on about the Illuminati? 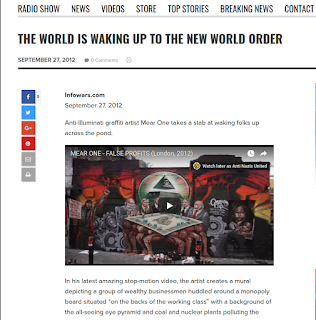 Still, what are the chances that a believer in conspiracy theories would subconsciously draw a piece of antisemitic art?

No need the speculation there. We already know, it's fairly high.

Ockerman's work is, but one example.

In all fairness, Jeremy Corbyn could counter with ignorance of the topic, and frankly in his case it is a profoundly strong defence! Nevertheless, Corbyn might do well to recall that not every antisemitic idea emanates from Charles Lindbergh or Henry Ford type figure.